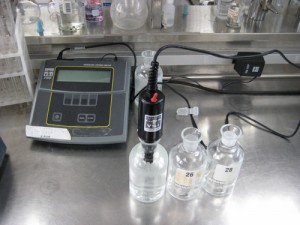 The BOD test measures the amount of waste in the water, referred to as “organic strength.”  Microorganisms in the wastewater need food and oxygen to live and reproduce.  Thus, they break down organic wastes for food and use dissolved oxygen in the process.  By measuring oxygen in wastewater with a dissolved oxygen meter before and after a 5-day incubation period, the relative organic strength of the wastewater can be calculated.  The greater the oxygen depletion, the more waste in the wastewater.
BOD NOTE*
The YRWWTP removes ~98% BOD and TSS before final discharge into the Yakima River.  If untreated wastewater was discharged to the river, nearly all of the dissolved oxygen in the river would be depleted as microorganisms broke down wastes for food.  With no dissolved oxygen, fish and other aquatic life would suffocate and die.  In addition to being unsightly, foul odors would develop.