A Brief History of YCTV 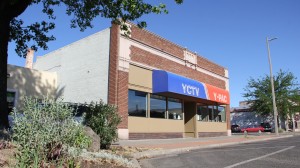 In the mid to late 1970’s, the fledgling cable TV industry began to expand from large metropolitan cities to smaller cities and to more rural areas. When cable companies began to show interest in coming to Yakima, the community was not initially ready to welcome cable TV with open arms. Concerns about “inappropriate” programming on cable led to Yakima voters twice rejecting approval of a cable TV “franchise.”

As part of the compensation for use of public rights-of-way, Cox had to provide a public access channel. The City of Yakima, as the administrator of the franchise, began the process of setting up and operating the public access channel. That channel became YCTV (Yakima Community Television) and first began airing on channel 36 in 1983. The first YCTV “facility” consisted of a 10-foot by 20-foot room at what was then the Yakima Valley Vocational Skills Center.

In the mid 1980’s, YCTV moved to a building near the corner of 24th Avenue and Nob Hill Blvd. That building included office space, a 20-foot by 20-foot studio, two editing bays, and a tiny equipment room. By that time, YCTV had provided community producer training to more than 750 people.

The people who have used YCTV over the years are many and varied. From senior citizens to grade school children, from heavy metal musicians to quilt makers, people from all walks of life have contributed to the rich history of YCTV.

Since it first went on the air in 1983, YCTV has become an integral part of the Yakima community and continues to provide each and every person who lives here with the tremendous opportunity to share their thoughts, interests, ideas, and creativity through YCTV, “The Peoples’ Channel.”